Home » Computer » What to look for in a gaming monitor
Computer

What to look for in a gaming monitor


The million-dollar question! There are a few different panels to choose from when you’re looking for a gaming monitor, but working out which one is best for your gaming style can be confusing.

So, let’s make things a little simpler. To start with, you need to know that there are a few different types of display technologies, and each comes with its pros and cons. However, the three that are most used in gaming monitors are IPS, TN, and VA.

For a more detailed explanation, check out our TN vs IPS vs VA comparison breakdown

Often regarded as the superior of the three, and with the price tag to match, IPS stands for in-plane switching. The reason for their superiority is that they offer better viewing angles and color accuracy than TN & VA panels. This doesn’t only make them a great choice for high-definition game playing, but also for anybody designing or editing games.

Generally, IPS panels have a response of less than 5ms which is adequate for most gaming needs. However, TN panels tend to have an even faster response time, so if you’re looking for as much smoothness as possible while you play, you’ll have to decide whether speed or detail is more important to you.

If you’re after something a little more budget-friendly, a gaming monitor with a TN (twisted nematic) panel could be the better choice. These tend to be the least expensive of all three, as well.

Sure, the viewing angles and color accuracy aren’t as good as those offered by an IPS panel. But they do have a super-fast response time, making them ideal for fast-paced, competitive, and multi-player games.

Finally, you have the choice of a VA panel. This stands for vertical alignment, and the stand-out feature of these is that they offer a better contrast ratio and provide deeper black levels than IPS panels. In terms of color accuracy and viewing angles, VA panels sit in the middle of TN and IPS – providing more accurate colors (and viewing angles) than TN but falling short of IPS in the same departments.

However, one notable downside to VA panels is that they have a slow response rate and, as such, often have issues with trailing and ghosting. This could be a particularly bad problem when playing games with many fast-moving objects, so this is definitely something to keep in mind when you’re making your decision.

Your gaming monitor’s contrast is the ratio between the brightest levels of white and darkest levels of black that can be produced. If it has a higher contrast ratio, this generally means it will be able to achieve deeper blacks and, as such, this results in better picture quality.

This is especially important for gameplay as you’ll want to be able to enjoy the graphics in as much detail and with the highest quality as possible.

If you’re playing in a well-lit room on a gaming monitor with a 1000:1 contrast ratio, the contrast will become less visible due to the ambient light falling onto the screen.

If you’re a competitive gamer who plays at the highest level, or simply enjoy playing games for over 8 hours at a time, it’s a good idea to consider investing in a gaming monitor with flicker-free technology. This is usually the standard in most gaming monitors these days, but it’s definitely something that’s worth looking out for.

Why is flicker-free important, though? To put it in the simplest terms possible, it reduces the flickering light being produced by your monitor’s backlight. In turn, this allows you to play for longer without your eyes feeling the fatiguing effects that can occur when looking at a flickering screen.

The effect of the amount of blue light being produced is one of the most debated things in the world of gaming monitors. Some people think it’s important to purchase a monitor with reduced blue light, and some don’t. There is an argument for each side, though.

Let’s start by looking at why a gaming monitor with reduced blue is a good thing. Viewing a monitor that’s equipped with a low blue light filter is definitely advised for individuals that like to game for long periods of time. It not only reduces the short-term strain put on your eyes, but it also reduces the risk of future problems occurring too.

Too much exposure to blue light can also interfere with sleep patterns, so once you’ve switched your monitor off, you’ll be less likely to have issues falling asleep if you’ve been playing on a gaming monitor with reduced blue light levels.

It will basically come down to personal preference and your own theories when looking at reduced blue light levels, but it is worth taking into account the information for both sides of the argument before making your decision. After all, your gaming setup is personal to you, and it’s important that you’re as comfortable as possible to really immerse yourself in your game.

No matter what resolution you end up choosing, one thing that all gaming monitors have in common is that they are either labeled LED or LCD. But which is better for gaming?

Well, if you want a gaming monitor that produces high-quality images with true color accuracy, there’s no doubt that an LED monitor is the best choice. You’ll want to go for one with a full-array backlight too, which we’ll discuss in more detail in a moment.

The main reason an LED monitor is best for gaming, however, is that it doesn’t shine with one consistent level of brightness. This means that you’ll be able to enjoy the hues and tones of your game, with both bright and dark lights shining simultaneously.

Both LED and LCD displays use liquid crystals to produce high-definition images. The difference between them is the backlight technology used. Let’s take a look at these differences below. 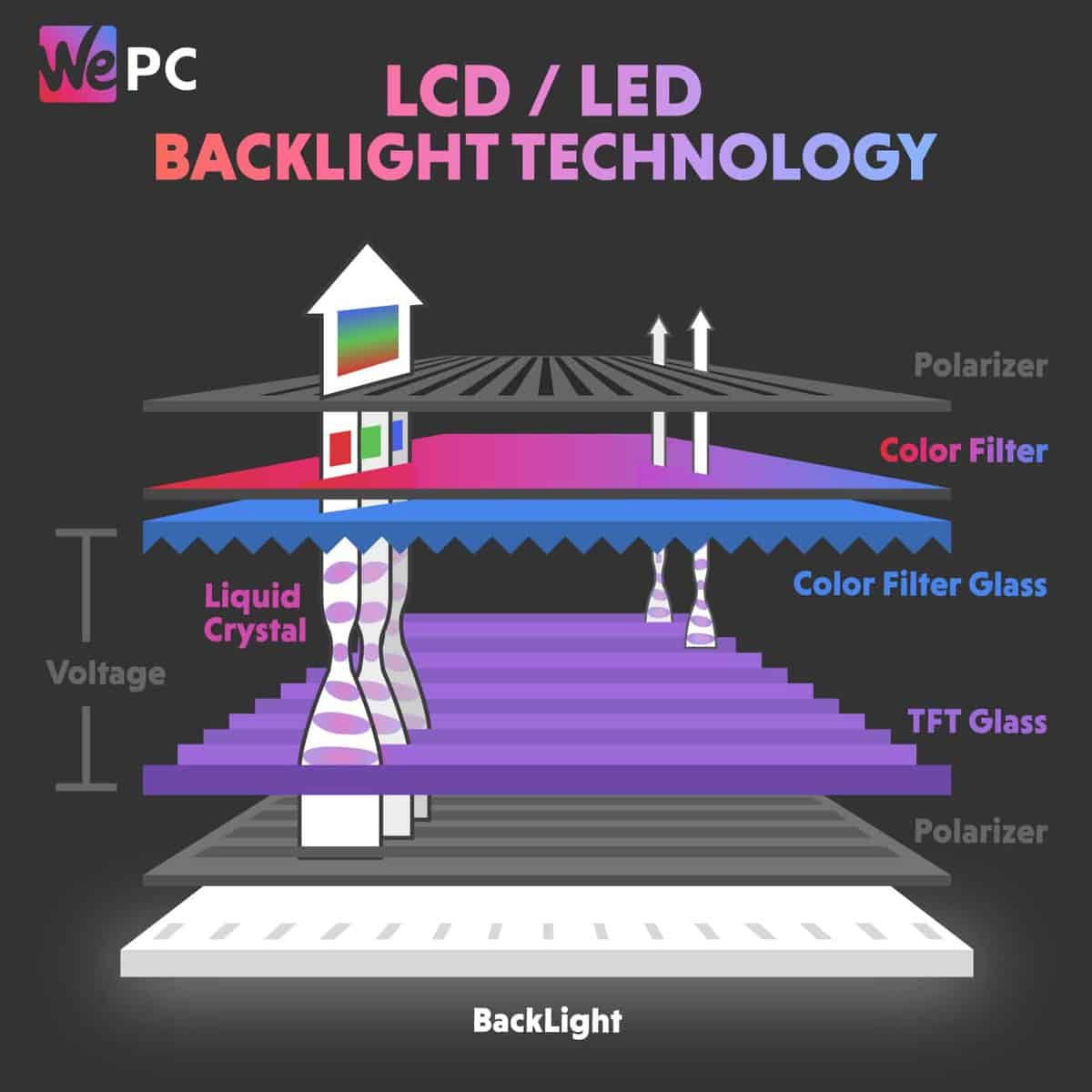 Standard LCD monitors use CCFLs (cold cathode fluorescent lamps). These are placed in an even layer directly behind the screen and, by doing this, they provide a consistent level of lighting right across the display.

This means that all parts of the picture displayed on the screen will be presented at a similar level of brightness. 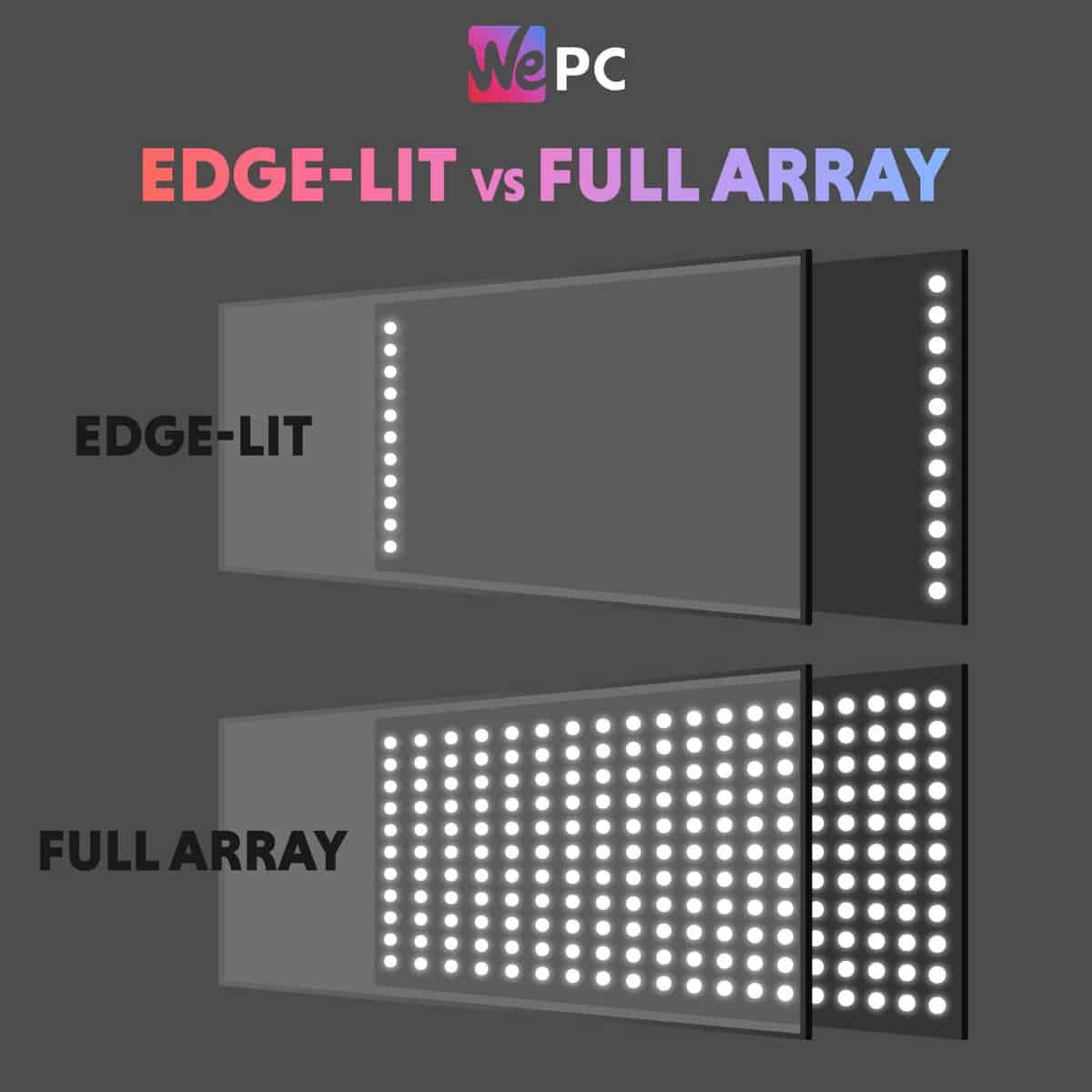 With edge backlighting, the LEDs are placed around the edges of the screen rather than directly behind it. This can be done in the following ways:

You’ll find this kind of backlighting in super-thin gaming monitors, and this is because it takes up less space.

It’s important to note, however, that edge backlighting doesn’t offer any local-dimming features, so the picture quality isn’t as good as full-array backlighting.

We’ll look at full-array backlighting, first of all. In this method, the LEDs are placed in the same way as LCD backlighting – in an even layer across the entire screen. The difference, however, is that the LEDs are arranged in zones. This allows each zone of lighting to be dimmed (known as local-dimming)

This is an important feature in a gaming monitor as it can improve picture quality and allows for different depths and tones to be represented accurately. It achieves this by allowing dark pixels and light pixels to shine at the same time, instead of relying on one level of brightness for everything.

We should take a moment to look at one of the fastest-emerging panel technologies that, over time, will most likely become the standard for all gaming monitors. This is OLED (Organic Light Emitting Diode), and these screens use a transmissive display that self-generates its own individually backlit pixels. This means it doesn’t have to rely on the backlighting provided by larger LEDs.

But why is this a good thing? Put simply, it means it can turn off individual pixels in order to achieve true black levels. This results in lower latency and sharper image quality.

If there is one downside to OLED technology, however, it’s that they can’t achieve the same level of brightness as LEDs. This isn’t necessarily a bad thing though, and it will certainly help to reduce eye strain when playing for hours at a time.