Roccat Kone XP Air Review: Jack of all trades, master of none

We’ve been testing it for a while now, so let’s see how the Roccat Kone XP Air gaming mouse holds up.

Roccat doesn’t screw around when it comes to mouse design. They make gaming mice for all types of grips, genres, and budgetary limits.

They’ve now cut the cord on the Kone XP and furnished it with a fancy charging dock/stand, similar to what we saw with the Razer Viper Ultimate. Let’s take a closer look and see how it performs. 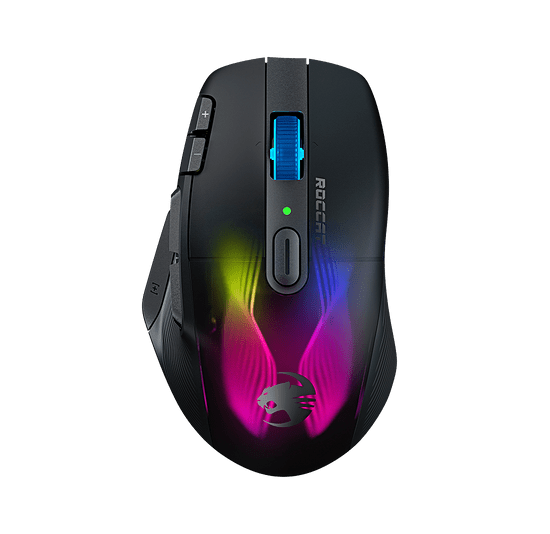 What’s in the box & setup

We were a little disappointed with the unboxing experience of the Roccat Kone XP Air, especially considering the $170 price point.

The exterior is pretty standard, with fancy imagery flanked with specs, stats, and other essential information regarding the mouse’s functionality.

Interesting, there’s a QR code on the front, which supposedly links to a ‘Live Demo’, however, when we tried it out, it just linked to the product page. We got our unit almost a month before public release though, so it could change by the time the Roccat Kone XP Air hits the shelves.

Most gaming mice within this price bracket come in posh boxes with high-density foam, magnetic clasps, and other premium additions that make the process of receiving a new feel more like a fun treat than simply removing something from the packaging.

The Roccat Kone XP Air’s box forgoes this in favor of cheap-feeling plastic inserts separated by a thick layer of cardboard, which kind of puts a damper on the experience.

It’s nothing fancy, but functional enough to lessen the likelihood of damage during its trip to your door. We say ‘lessen’ as the lack of any foam means that it would be far easier to turn up broken than other mice in this price bracket with nicer packaging.

However, this could be a good thing. Perhaps they opted for cheap packaging to allocate the budget to the design and manufacture of the mouse itself?

Well, they’ve definitely put some effort into the exterior, that’s for sure, as this is one of the most visually impressive gaming mice we’ve seen. Speaking of which:

We move now to what got us interested in the mouse in the first place, the design. There’s a lot to talk about here as it would appear that Roccat has taken design cues from all their previous mice and combined them into the Kone XP Air.

In terms of color, you get either black or white. Both of these colors are translucent to an extent, with this effect being most noticeable on the palm section of the mouse, and disappearing as you reach the mouse buttons.

This looks unassuming enough until you turn the mouse on, at which point the mouse turns from an ergonomic mouse with a funny logo to something very G A M E R indeed.

The star of the show is the somewhat 3D lighting on the palm section. I(t’s hard to describe so we’d recommend a studious look at the product photography throughout this review.

Essentially, there are two waves that run parallel to each other, converging, then diverging from one another, like Moses parting the red, green and, blue sea.

The mouse wheel has also been given an injection of RGB lighting, with the textured rubber section subtly glowing, flanked on both sides with vivid glowing edges. In terms of mouse wheel lighting, this is as good as it gets, so far as we’ve seen.

When it comes to branding, Roccat has done well with the Kone XP Air. If you’ve read our peripheral reviews before, you’ll be familiar with our dislike for overly enthusiastic branding.

Luckily, all you get on the Kone XP Air is the Roccat logo on the palm section and ‘ROCCAT’ down the side of the right mouse button. This is an agreeable level of branding so we haven’t been triggered this time.

The dock also has some lovely RGB lighting too, though not with the same fancy waves we described. Instead, we get a smooth and diffuse perimeter that can glow in sync with the mouse, or independently.

There’s also a convenient passthrough for the USB dongle, however, it’s located at the front, which kind of disrupt the otherwise smooth shape.

We again see the Roccat logo front and center, but it’s small and dark enough that we don’t find it annoying, and it’s less noticeable still, as the bright copper charging contacts are positioned directly above it.

The translucent shell might have some people worried about the longevity of the mouse, however, we can say that it feels every bit as solid as we had hoped.

There are some slight creaks here and there when we squeeze the mouse, however,e there’s nothing too concerning.

Additionally, there is a barely perceptible rattle when the mouse is shaken and we suspect that it stems from the scroll wheel, but the performance of the mouse remains unaffected.

The mouse feet are, thankfully, 100% PTFE, and are apparently heat-treated. A quick google search tells us that heat treatment of PTFE improves its wear resistance.

We don’t know about that quite yet, but the mouse glides beautifully out of the box as Roccat has done us the courtesy of applying a small bevel around the edges of the feet, which eliminates the scratchy wearing-in period.

Moving to the dock, the story here is also very good. With it feeling solid and functioning flawlessly during our testing period, however, we do wish it had more grip on the desk, as it slips more than we’d like. Additional grippy rubber like we saw on the Viper Ultimate dock would be a good addition here.

The included USB Type A to C is also good, with a low-friction braiding that means you won’t have your performance impacted too much when you run dry and need to recharge mid-game. Speaking of gameplay:

The 98g/3.4oz weight and precise Owl-Eye 19K optical sensor make the Roccat Kone XP Air a very capable mouse, as do the 15 reprogrammable buttons, however, this is where the Kone XP Air starts to vex us.

It’s pretty good for all types of games. It’s light enough for FPS, has enough buttons for MMOs, and is ergonomic enough for long days of work, but its design seems to lack focus.

It doesn’t seem designed for any specific use, it’s good for everything, but not great for anything. If you play all sorts of games on the regular and don’t want to deal with the clutter and hassle of multiple gaming mice, it’s a great option.

However, if you’re an FPS Player, you’ll find the extra buttons superfluous and too easy to accidentally press, and if you’re an MMO player, there aren’t quite enough buttons in the right place.

The Bluetooth and 2.4GHz modes didn’t result in any noticeable latency and the battery life easily got us through the working day and gaming night. If this isn’t the case for you, the mouse can fast charge to give you a few more hours of wireless gaming from just a few minutes on the dock or plugged into the cable.

Overall, you won’t be disappointed with the Kone XP Air’s gaming performance, but it won’t blow you away either.

Peripheral companion software suites always seem to have something wrong with them. They eat too much RAM, they’re buggy, and sometimes they are unintuitive to the point where we wonder if it’s intentional.

It had a bit of a learning curve and seemed downright broken initially, but you have to remember we got this mouse almost a month before it was actually released, so the software wasn’t fully updated to support it.

Once we received a couple of updates the big problems disappeared and we managed to easily assign macros, change settings, and play with the lighting effects.

It’s not the most aesthetically pleasing software, and its layout isn’t nearly as simple as it should be, but it’s got some of the most comprehensive functionality we’ve seen from peripheral software, so we consider the steep learning curve totally worth it.

We were very pleased with the Kone XP Air. All the different aspects of great mouse design are present. It’s comfortable, lightweight, tactile, accurate, and boasts copious connectivity options.

The mouse’s great RGB lighting design is fantastic fun to look at, and the charging dock/display stand is functional, aesthetic, and convenient.

Gaming on the Kone Xp Air was also a fun experience, though the aforementioned lack of design focussed meant it wasn’t our favorite for any particular genre.

Roccat has done well here. They’ve taken a popular mouse shape and upgraded it with comprehensive wireless connectivity and the charging dock that we’ve been fans of since the Razer Viper Ultimate.

We have no complaints about the specs, build quality, or design. However, if you’re looking for the best mouse for your specific genre of choice, the Roccat Kone XP Ultra probably isn’t it, which makes us question if the $160 price is worth it…