Synopsis: While solid and proven, the trestle table design lends itself to endless variations. The height can be changed and the stretchers, top, and legs can be made in an infinite variety of sizes and shapes. Thomas Throop has explored this furniture form in designs that range from traditional to completely contemporary.

The trestle table has always intrigued me, from its humble origins during medieval times, when plain planks were laid on sawhorse-like trestles, to more recent forms with a fixed top supported by a pair of pedestals with a connecting stretcher. I’ve been most inspired by early English refectory tables and by Shaker and Arts and Crafts-era trestles. The trestle table’s general design is simply elegant, structurally sound, and very efficient to make, requiring only straight-ahead joinery and a minimum of material. There’s great economy to the structure: The stretcher keeps the legs square, and the top is integral, acting essentially as a second stretcher to keep the base from racking and from twisting. And compared to most dining and coffee tables, with their legs at the corners and aprons all around, trestles offer far superior leg space.

Yet the trestle table is endlessly flexible. The form can be used at a variety of heights, for anything from a dining table to a bench, a hall table to a coffee table, and anywhere in between. Beyond that, the structural elements can be designed in an infinite variety of shapes, sizes, and proportions, all detailed to the desired effect.

My forays into the trestle form range from the deeply traditional to the completely contemporary. In between I’ve played with all manner of trestles, and I’ve selected a number of different ones to discuss here. My first were dining tables whose legs were made in a familiar post, foot, and top rail configuration. Later, designing low trestle tables, I used a modified three-part leg, broadening the post into more of a plank. Then I started to think about foyer tables and began designing pieces in which the three-part leg lost its foot and its top rail, and became a full-height slab.

Along the way, I also began moving the stretcher higher on some tables, allowing more negative space below it and creating more visual tension with the narrower space above. Pushing the form even further, I started designing consoles and benches with waterfall legs and with the rail pressed tight to the top—a completely different look from earlier ones I made, but still maintaining the simple structural elegance of the trestle table form. What’s next for my trestle table design, I’m not sure, but I am looking forward to exploring its continued evolution. 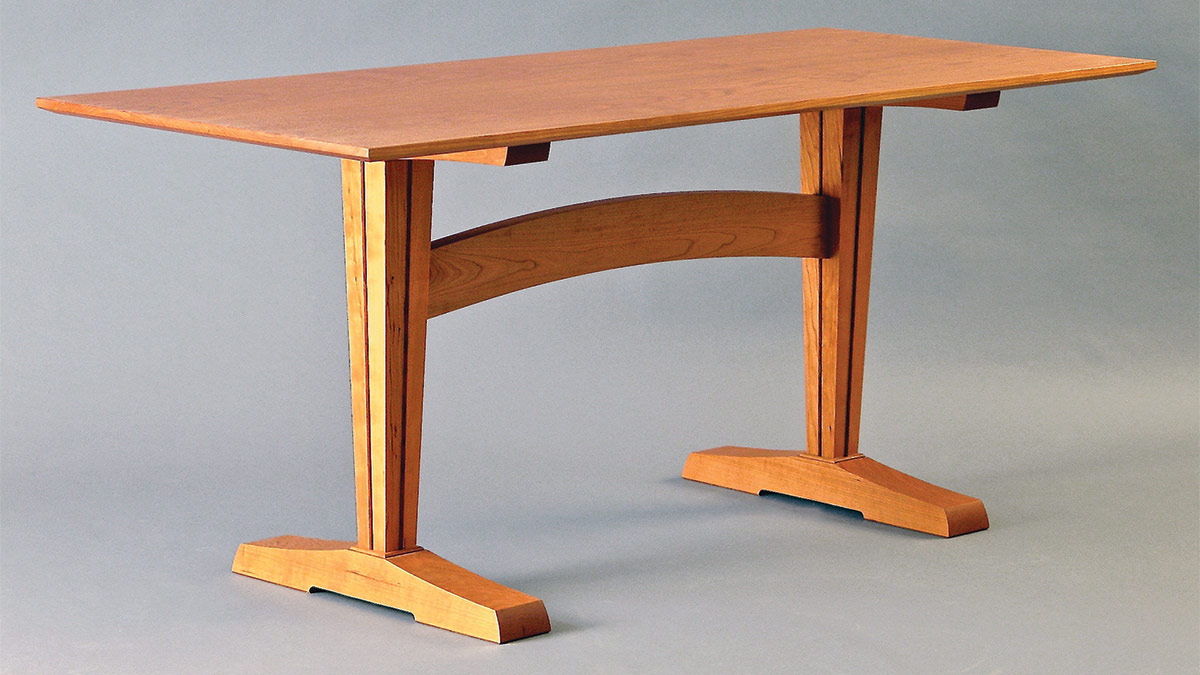 A contemporary twist on the traditional trestle is what I had in mind for this cherry dining table. I wanted to convey the feeling that the table was blooming—springing out of the ground. That led me to taper the leg posts and give the stretcher an upward arch. The foot, a modernized version of a Shaker trestle foot, blends the curve of the stretcher with the flat planes of the posts. Inlaid walnut beads on the posts further accentuate verticality, and an underbevel lightens the top by making it appear thinner than it is.

Designed in the vein of an English Arts and Crafts trestle 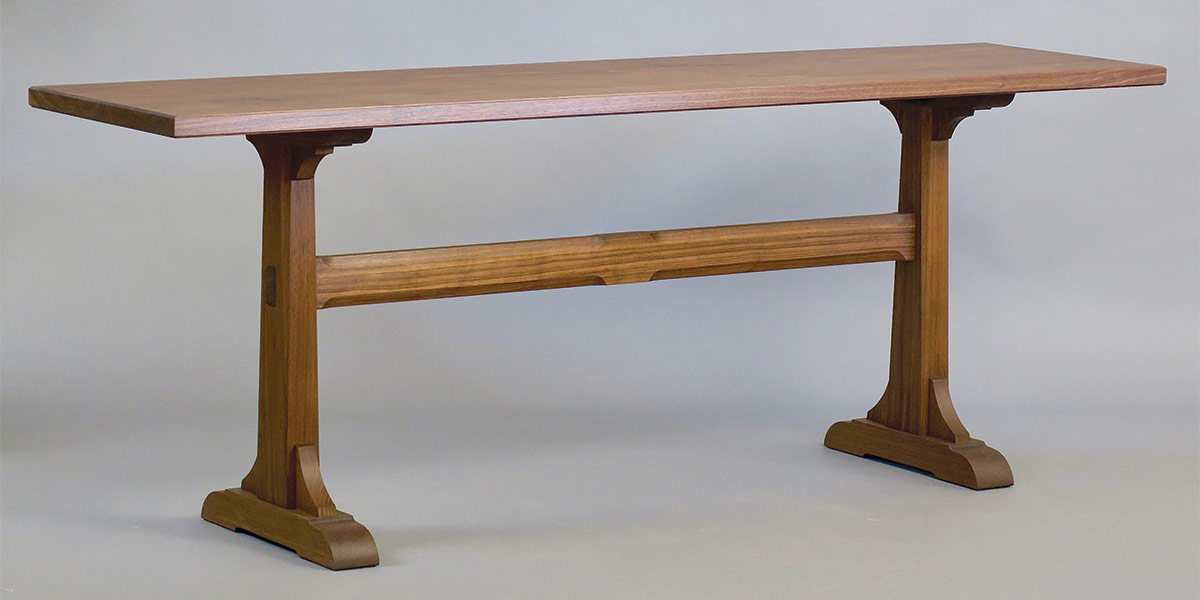 Designed in the vein of an English Arts and Crafts trestle, this sofa table in walnut adds a few embellishments to the original. The challenge was to make the piece look strong and sturdy but not overly heavy. The posts, at 2-1/4 in. thick and tapering from 5 in. wide at the base to 3-1⁄2 in. at the top, have definite heft. But I cut tapered chamfers on the corners—wide at the top to narrow at the bottom; they accentuate the post’s taper and lighten its top. Heavy chamfers on the stretcher visually lighten it as well, and also tie its look to the legs. I stopped those chamfers with lamb’s tongues to give the eye a resting place at the center of the stretcher. 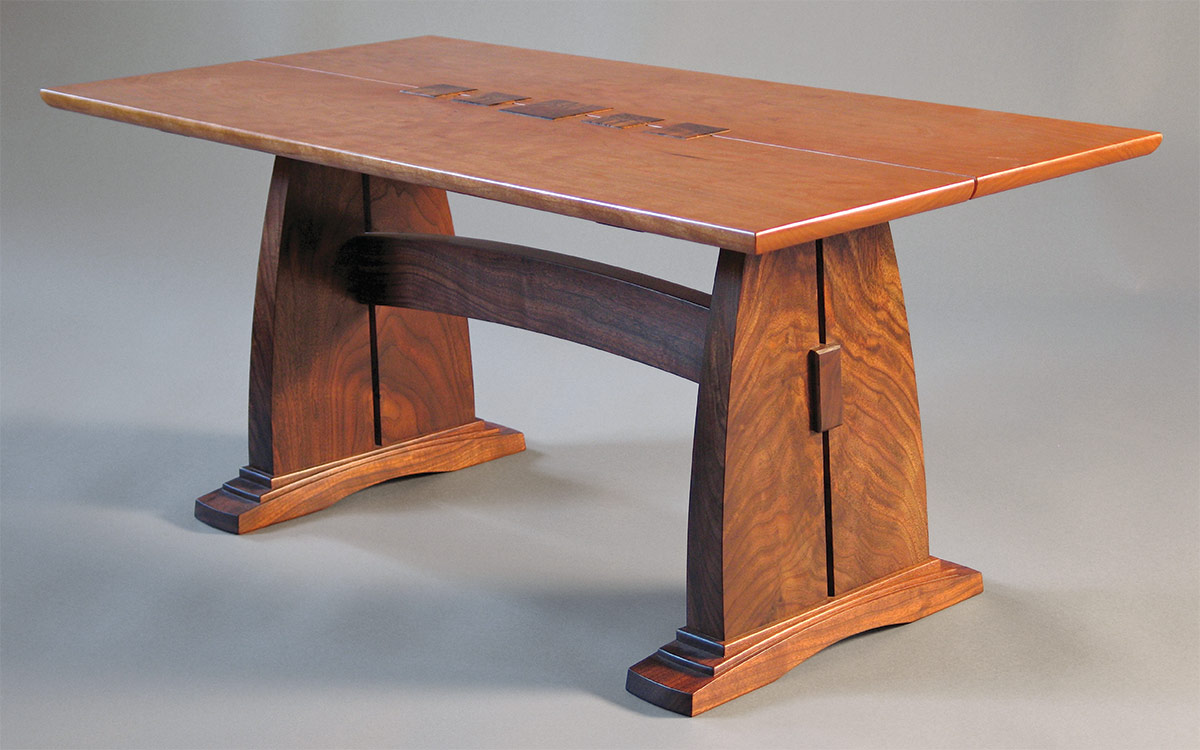 Slab-like legs here replace the posts more typical of trestle tables. This coffee table in walnut with a cherry top was the first trestle table I made with slab legs, but many more variations have followed. The slabs were originally one wide plank, but I cut them in half and created a gap between them to break up the wide surface and create a shadowline. The slabs are notched to accept the stretcher’s through-tenon. I carried the same idea to the top, which also has a gap down the middle, this one bridged by a series of inlaid squares of bastogne walnut—a hybrid of claro and English walnut. 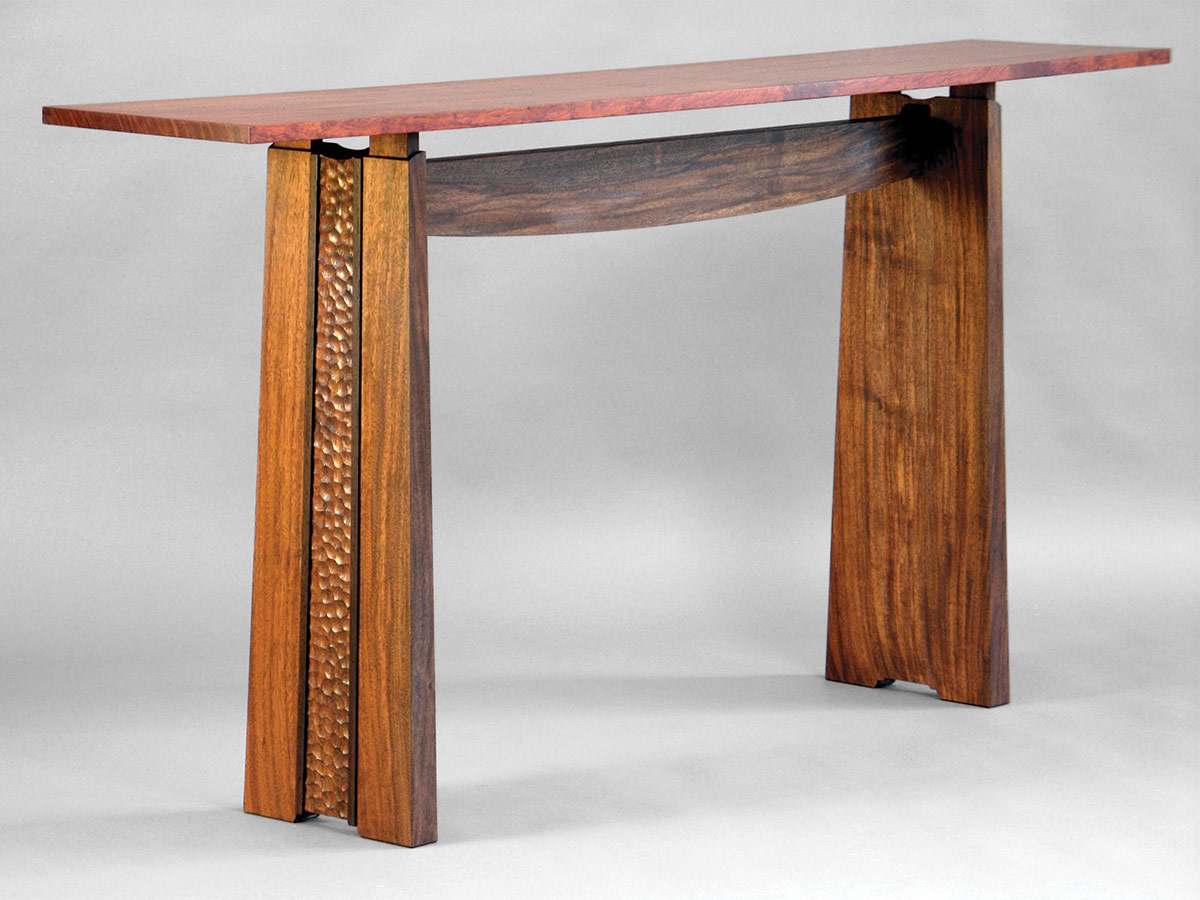 Moving the stretcher upward transformed the trestle on this hall table in walnut and bubinga, giving the piece a far lighter feeling while retaining its structural function. I also dispensed with a separate foot and top rail, aiming for a more elemental and contemporary feeling. I did include a small cutout at the bottom of the leg, which produces the appearance of feet. The design of the slabs was inspired by the architecture of the Yucatan—in particular, the grand pyramid Chichen Itza, with its wide stairway rising between larger smooth blocks of stone. I carved the central section of the leg slabs to echo that arrangement of a fine-textured band framed by smooth ones.

“Can you add a drawer to that table?” 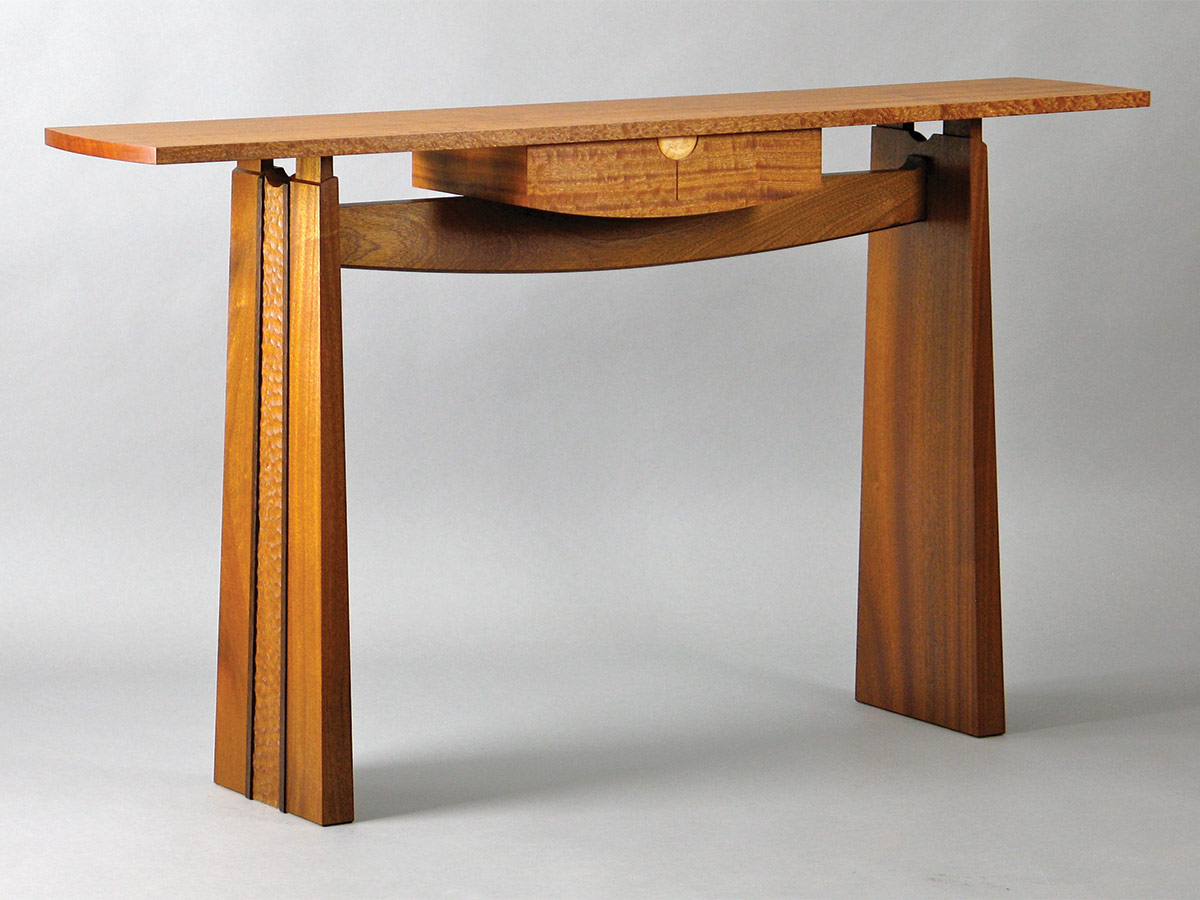 “Can you add a drawer to that table?” a client asked, and this was my answer. To make room, I dropped the stretcher a bit and extended the inset section at the tops of the legs. I made the drawer front curved on the bottom to reflect the curve of the stretcher. I included the chip carving on the legs but skipped the cutout at the bottom, giving these legs a more rooted feeling. 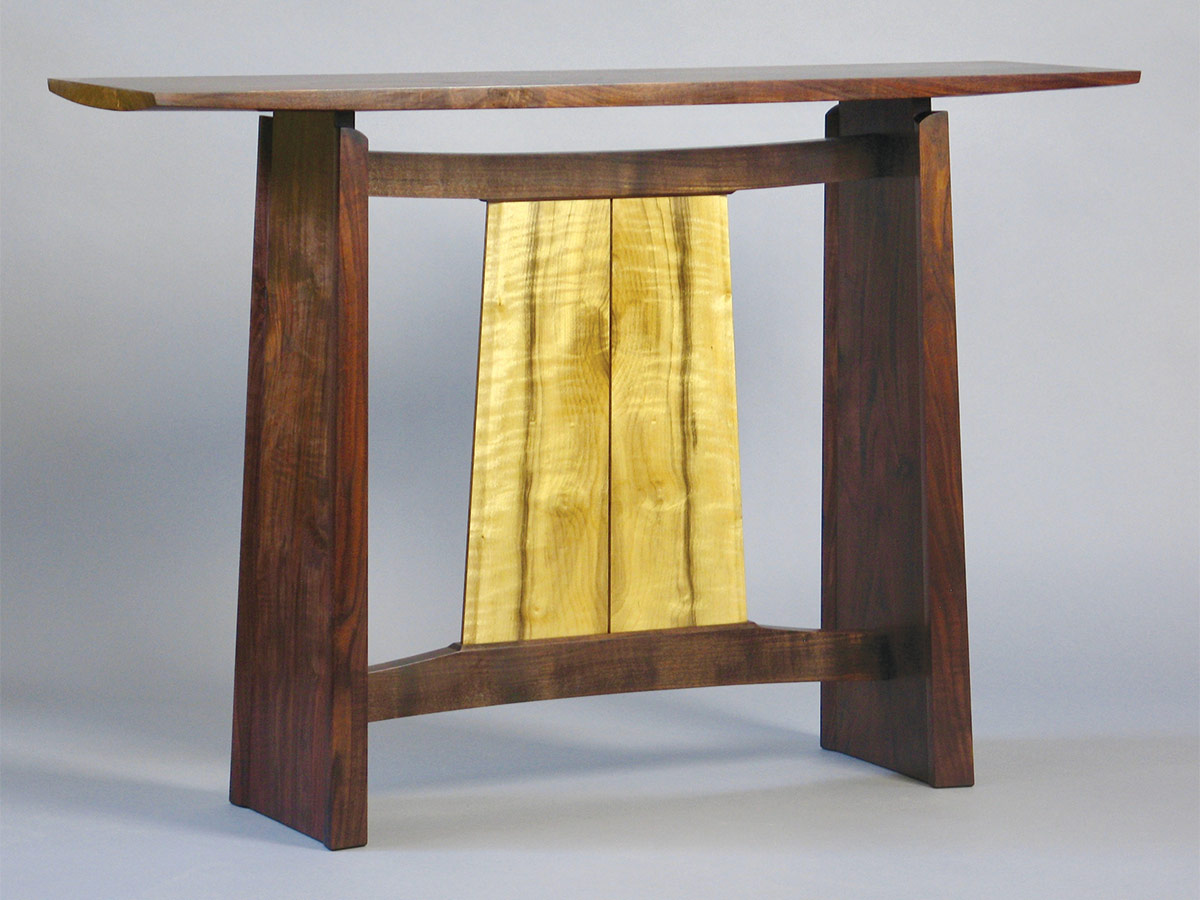 Sometimes materials drive the design. In all my earlier iterations of this type of trestle table I had used the legs and stretcher to define negative space at the center of the piece. But in this one, with its claro walnut legs and top, I wanted to feature two tapered panels of beautiful Oregon myrtle at the center. To help draw your eye to the panels, I curved the top and bottom stretchers and made them wider as they approach the panels. I wanted to have legs that tapered, thicker at the floor, but I didn’t have thick enough planks of claro to manage it. So instead I applied tapered edging to either side of a parallel panel.

Reimagining the trestle table, I used the same key structural elements—legs, stretcher, and top, to build this bench. I was looking for simple, elemental shapes and trying to make something new from the historical trestle form. All the parts move in sympathy, so there are no wood movement issues, and the design is extremely sound structurally, since the stretcher shares a long-grain glue joint with the top, creating a rigid T-shaped element, and the mitered waterfall legs are screwed and glued into notches in the stretcher.

How to Make Your Own Sew In Labels – Quilting