Will Apple’s entry into the buy now, pay later (BNPL) space upend the already competitive industry? That’s the question many are trying to answer following the announcement that the company will launch Apple Pay Later in the US later this year. Apple is entering a space dominated by Affirm, Afterpay, Klarna, PayPal, and Zip (formerly Quadpay), with payment value expected to grow by more than 75% year over year (YoY) this year, according to the latest BNPL forecast from Insider Intelligence. (Note that we only track third-party BNPL apps and do not include card-linked or retail-branded platforms.) 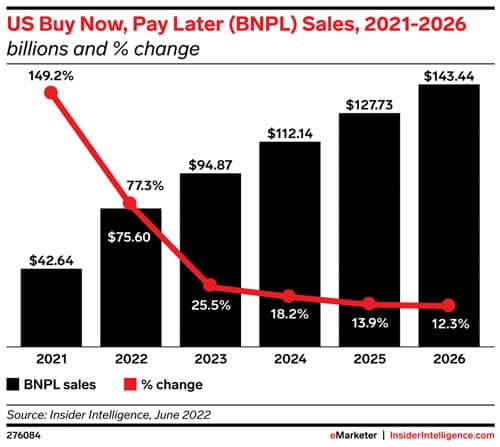 “As major retailers like Target and Amazon embrace BNPL, acceptance is becoming more universal—both online and in-store,” Jaime Toplin, senior analyst at Insider Intelligence, said. “At the same time, major providers like Klarna and Affirm are doubling down on apps that make it easier for customers to use BNPL. And providers continue to move into sectors like travel, letting customers use BNPL for more purchases. These factors are combining to build customer habits and, ultimately, drive spending.”

As digital buyers become more comfortable using BNPL services, average spending per user will continue to grow at double-digit rates as well (through 2024). Average spending in the US this year will jump by 13.5% YoY to $957.46 and will surpass $1,000 next year.

The number of US BNPL users will jump by 56.1% YoY this year to 79.0 million. This comes after three years of triple-digit growth—the pandemic drove digital payments growth in general. Two milestones to watch for in 2022: More than a quarter of the US population and over one-third of US digital buyers will use a BNPL service. Among three key players offering BNPL apps, we expect Klarna to remain the market leader by users through 2026, followed by Afterpay and Affirm. Please note that we don’t break out PayPal or Zip at this time. 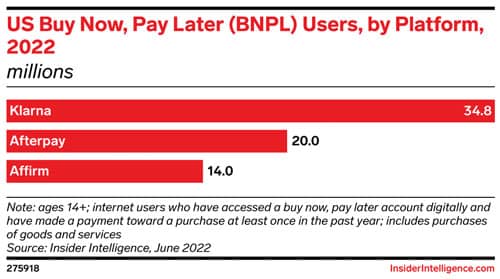 “Apple Pay Later’s September launch could surge use by making BNPL readily available to millions of users on a platform native to the devices they use every day. This access and ease of use creates strong competition for existing titans, though Apple’s lower $1,000 limit may restrict the types of purchases the service is used for. It’s likely we’ll see existing giants continue to ramp up loyalty initiatives in anticipation of the new service’s debut,” Toplin stated.

Younger demographics drawn to these app-based, easy-to-use, and easy-to-manage solutions will continue to drive BNPL usage in the near term. Gen Z makes up the heaviest users, with more than half (55.1%) of digital buyers in that group using a BNPL platform this year—followed by millennials, Gen X, and baby boomers. 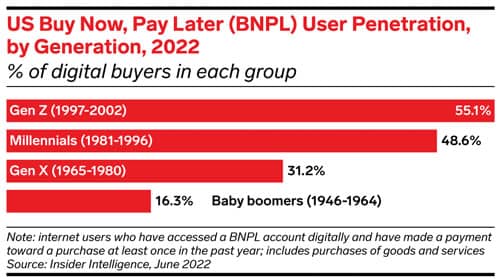 Insider Intelligence forecasts and estimates are based on an analysis of quantitative and qualitative data from research firms, government agencies, media firms, and public companies, plus interviews with top executives at publishers, ad buyers, and agencies. Data is weighted based on methodology and soundness. Each Insider Intelligence forecast fits within the larger matrix of all its forecasts, with the same assumptions and general framework used to project figures in a wide variety of areas. Regular re-evaluation of available data means the forecasts reflect the latest business developments, technology trends, and economic changes.

Insider Intelligence aims to be the world’s leading research service focused on digital transformation. Our mission is to empower professionals with the data, insights, and analysis to make grounded decisions in a digital world. Each year, we produce nearly 300 reports, 7,000 charts, 1,500 newsletters, and 200 forecasts across the industries of Advertising, Media, and Marketing; Financial Services; Healthcare; and Retail and Ecommerce. Insider Intelligence is owned by European media giant Axel Springer S.E. and was formed in 2020 from the combination of eMarketer and Business Insider Intelligence (BII).