Before we jump into our in-depth reviews of the best Ryzen 7 5800X CPU coolers, it’s important that we explain some things to help you better understand how CPU coolers work and the things to consider when shopping for a new one.

Why do we need a CPU cooler?

CPU coolers play an important part in every PC, whether that be an air cooler, AIO cooler, or full custom loop. Every CPU cooler aims to achieve the same thing – a cool CPU.

Every CPU requires electricity to function, we hope this isn’t news to everyone. But what might be is that every electrical component wastes energy, no matter how big or how small – that’s just how life works. Energy waste, in most cases, presents itself as thermal energy. Electrical components arent 100% efficient so they waste some of that energy as heat.

In terms of PC components, we have an idealism for this: TDP. TDP stands for thermal dynamic power and it’s the maximum amount of thermal energy a component can emanate under normal operating conditions.

It’s TDP that every CPU cooler, or every electrical cooler in the world more accurately, aims to eliminate.

How do CPU coolers work?

CPU coolers are pretty complicated in terms of actual physics, but they aim to fulfill one single purpose and that’s to dump as much heat out of the CPU as possible. CPU coolers achieve this in a couple of ways.

There are some basic physics to understand if you want to know exactly how CPU coolers work. Heat dissipation is performed via three main methods, conduction, convection, and radiation. Most CPU coolers use at least one of the three methods at some stage throughout the cooling cycle, even liquid coolers.

This is a very simple explanation of how CPU coolers work and we have one far more in-depth in our “Best CPU cooler for Ryzen 9 5900X” article.

There are some things to consider when thinking about upgrading your CPU cooler.

Both air and liquid cooling are viable options when it comes to CPU cooling, but one is superior to another in terms of performance and can end up saving you a pretty penny if you know what you need.

Air cooling has been around for as long as computers have, and even the most advanced forms of water cooling still use bits of air cooling to dissipate heat away from its radiators.

There’s not a whole lot to say about air coolers, other than the fact they are some of the cheaper, and simpler options on the market. Cheap doesn’t necessarily mean bad though, as you will see some air coolers can even compete with lower-end AIO and liquid coolers on the market.

Air coolers are easy to install and maintain, and their simplicity is certainly one of their strengths.

Liquid cooling comes in a couple of different forms, AIOs and custom loops. AIO coolers are all the goodness of custom loops rolled into one neat little package, whereas custom loops can be as complex or as simple as you want them to be.

AIO liquid coolers consist of a few components, a water block, a built-in pump, transport tubes, a radiator, and a few fans. These components comprise a mid-level water cooling system.

AIOs are closed, meaning you cant open them up to access the pump or block internals. This enclosed design means that AIOs are less susceptible to dust build-up and damage around the pump area but still suffer the same dust build-up on radiators and fans, like any other cooling system – depending on your airflow configuration.

AIOs are generally less expensive than full custom loops, but they can be much more expensive than a decent air cooler. There are a lot of AIO liquid coolers out there in the wild and they all come in different shapes and sizes, some even feature LCD screens mounted onto the water block to display images, GIFs, or system information.

Despite the increase in price, AIOs do perform significantly better than air coolers in most cases.

Custom loops are the most expensive way to regulate CPU temperatures. The goal of custom loops is the same as AIO coolers, to use water to draw heat from the CPU to a radiator. The trick is that custom loops do it a lot more efficiently, as there’s usually more surface area for cooling within the loop and a larger volume of water.

Custom loops can use any size reservoir with a pump capable of moving large volumes of water rapidly. They can also incorporate whatever size radiator is required multiple times into the system. This combination of advantages means custom loops can cool a lot more efficiently than AIOs as they aren’t restricted to a specific size. This being said you still need to operate within the confines of your PC case.

Maintenance is a lot harder on a custom loop, however. Custom loop maintenance involves draining the entire system of all water and then attempting whatever repairs or cleaning is necessary. You should also replace the cooling solution twice yearly to avoid issues.

Besides the points we mentioned, a custom loop isn’t too much different than an AIO in an operational sense, it does the same thing.

When you’re selecting any CPU cooler it’s important you make sure that the cooler fits onto the CPU socket on your motherboard. This isn’t a problem in this day and age as most coolers ship with compatibility for most sockets. However, if you’re opting for an old cooler whilst owning a newer socket, it would be wise to check the compatibility sheet online or within your CPU cooler manual.

You need to ensure your PC case supports the CPU cooler you’re planning on purchasing, this may be a height requirement for air coolers or radiator dimensions for liquid coolers. Having a CPU cooler that does not fit into your case is not ideal for obvious reasons.

Here we will list the three CPU coolers we feel are the best choice for the Ryzen 7 5800X CPU.

The ASUS ROG Ryujin II is one of the most visually pleasing AIO coolers in the world in our opinion, mostly thanks to its huge pump and predominant, industrial-looking LCD screen.

This model is available in both 240 and 360mm variants, giving builders with different form factor cases some flexibility no matter the size of the PC case.

The main talking point of the Ryujin II is the addition of the LCD screen, which allows any image or GIF to be displayed. The LCD screen has full AIDA64 support, meaning you can display current system information on the vivid 3.5″ full-color screen if you so wish.

The Ryuijin ii also features 380mm sleeved tubing comprised of rubber, to add durability and improve the visuals over the standard tube designs.

All in all, we have a beefy, efficient radiator that will provide your 5800X with all the cooling it needs, and the inclusion of a high-flow water pump means your CPU will never be short of water to cool it.

You can check out our full Ryujin ii review here.

The Corsair H150i iCUE Elite Capellix is high on a lot of PC builders’ acquisition sheets, as Corsair is known for its impressive designs and product quality. Corsair managed to keep its unmatched efficiency and significantly update its aesthetics with this AIO cooler.

The cooling potential of the H150i matches that of the competition and there are other similar variants to cater to a variety of PC case sizes too. This 360mm option is perfect for the new high-end Ryzen CPUs, including the 5800X. With amazing visuals to match.

Speaking of aesthetics, few coolers do it as well as the Capellix Elite. From the enclosed pump to the exposed fans, it is incredibly well designed, and manufactured. It can provide all the cooling a high TDP CPU needs.

You can also purchase an LCD screen upgrade for this CPU cooler. This upgrades the AIO to feature a full-color LCD screen over the head of the water block to display gifs, pictures, and a full host of preset animations made by Corsair. Check out a piece on the Corsair LCD upgrade kit.

There is also a separate LCD variant of this AIO cooler with upgraded fans, you can find it here: Corsair H150i LCD review. 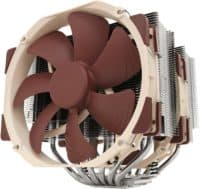 The Noctua NH-D15 stands against its competition, this air cooler even gives some lower-end liquid coolers a run for their money, if you can look past the brown.

The design is definitely to a specific taste, but it’s the cooling potential that matters most when opting for a CPU cooler, not its aesthetics.

The size can be an issue if you’re wanting to build in a smaller form factor case, with extra clearance needed for the two large heatsinks and accompanying 140mm fans. Noctua does offer an ‘S’ variant, which is significantly smaller for those that lack the room for the larger model, without compromising too much on cooling efficiency.

Overall, if you can fit this into your PC case and somehow make the brown work, it’s one of the best air coolers you can get on the market today. The max noise sits near 24.6dB and with a max RPM of 1500, offering high-end air cooling performance with relatively low noise levels.

Whether you just got a Ryzen 7 5800X, or you’re thinking of getting one and decided you’d examine the market of CPU coolers first, you’re in good hands with any one of these three coolers. The 5800X has a high TDP and means business when it comes to performance, so you’re going to need a CPU cooler that fits the bill.

Our strong recommendation is the industrial ASUS ROG Ryujin ii, its monstrous cooling performance coupled with its strong, bold, and industrial aesthetics shows it means business.

You wouldn’t be disappointed picking up the Noctua, however, if air cooling is more your niche, or you’re on a bit of a budget. The Noctua offers superior cooling performance at a very low noise level. We hope you enjoyed our Best CPU cooler for Ryzen 7 5800X article.