When I sought out to learn more about the benches used in the churches of The Community of True Inspiration what I discovered was a hidden gem of humble craftsmanship tucked away in the unassuming villages of Amana, IA. What excites me is the forensic aspect of discovering the benches’ craftsmanship and details in the context of their history and continued, almost daily use for over 170 years.

The Amana Colonies consists of seven different communities settled along the Iowa River valley, west of Iowa City, IA. The founders of the community fled religious persecution in Germany and settled in Ebenezer, NY (what is now West Seneca, NY) around 1843. Cautious of urban expansion in the Buffalo area, and the worldly influences that might exert on their members, the elders sought land west, and settled in what is now Amana beginning in 1855. Yet, in those short 12 years the community had built up a high level of infrastructure necessary to support their membership across several villages. Blacksmiths, woolen mills, cabinet shops, locksmiths, watchmakers, bakeries, basically everything necessary for small town life in early 19th century America. An old map of Ebenezer that hangs in the Middle Amana church shows a virtually identical layout to the seven present-day villages in Amana. In 1855 when the community moved to Iowa, everything except the buildings came along on the journey, including likely several hundred church benches. 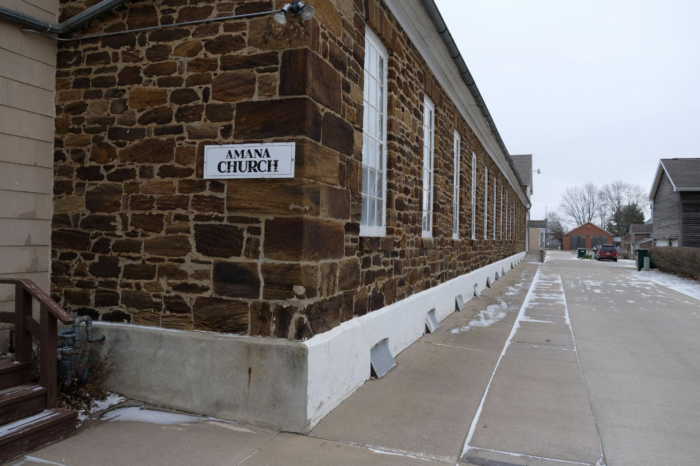 The surviving benches can be found in three extant churches that are still used today for worship. Each village had its own church, but some churches were abandoned or sold, so the benches found their way into other churches, storage, museums, or even repurposed for other church use.

The first benches I encountered and studied were in the Amana Heritage Society Museum, being used in their small lecture room. This first encounter taught me that no two benches are alike, but at the same time, they are all built to the same basic plan. Legs that penetrate a batten and seat, usually three back splats that terminate below the batten with a pegged joint and come to rest on a back leg, and a crest rail.

But it wasn’t until I visited the church in Middle Amana that I got a chance to really study the benches up close with the help of Amana historian and church member Peter Hoenle, where we spent the better part of a day partially dismantling a bench in order to further study its joinery.

Let’s start at the floor and work up. The legs are usually turned round, but many benches had faceted legs worked by a drawknife or spokeshave, some are fully octagonal. All legs are tapered. Rake and splay are all over the map. All benches had at least some rake front and back, but many had no splay. The legs were vertical when viewed from the front or back. Some benches with a third set of legs in the middle used only a single leg with no rake or splay.

The leg we removed from the seat was tapered, and on most benches we observed similar tapering on the leg tenons. Some tenons are sawn with a X shaped kerf and wedges driven in. All legs pass completely through the batten and seat.

The battens join to the seat with a sliding dovetail. Sometimes this dovetail pierces the front edge of the seat (as in my bench) but on some benches it stops short. A more time consuming joint to create.

The front edges of some benches are also rounded under. This wouldn’t affect the comfort of the bench. It’s a design element.

The back of the battens are nearly all the same. A through mortise houses the narrowed tenon of the splat as it passes through the batten’s mortise. Most benches feature the notch in the back of the seat to accept the splat, but some don’t.

The splat’s tenon is pegged in place from below the batten. Some pegs enter from the side (the design I chose to use) and some from the back. Some pegs are round, while others are square.

The splats are all very similar above the seat. But below we see some differences. It seems the craftsmen weren’t too concerned with precision where the tenon comes to rest against the back of the legs. Some are extremely precise, while others completely miss the leg. Amazingly, these benches have held up. This joint is extremely robust, even when executed poorly.

The splats join the crest rail with a full width tenon, which is usually reinforced with two pegs, which can be round or square in shape. The tenon we dismantled came apart easily. There was little or no evidence that glue was used.

The crest rail is usually a simple rectangle with square cut ends. But some benches feature an ogee shape cut into one or both ends of the bench. For benches with only one ogee (and these were always shorter) we guessed these were paired with another bench with an ogee on the opposite end, with the square cut ends butting together in a row.

The soap finish on the benches has taken on a whitish cast in areas that don’t get wear. But on the upper parts of the bench, especially the seat surface and front face of the crest, the most incredible burnished texture has developed between the early and late wood from 170 years of constant use. It’s really quite a beautiful thing to see and touch. Not something that can be duplicated outside of time. 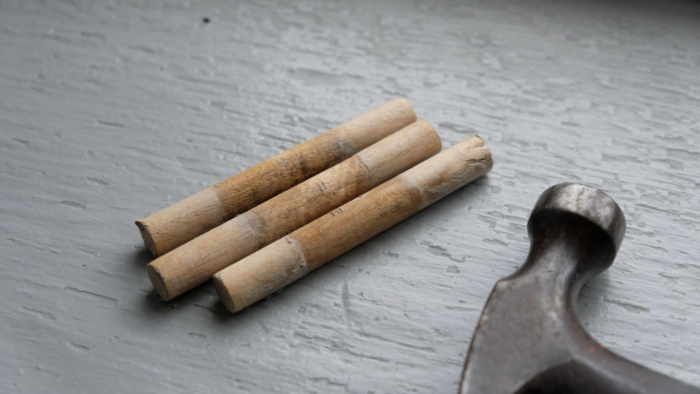 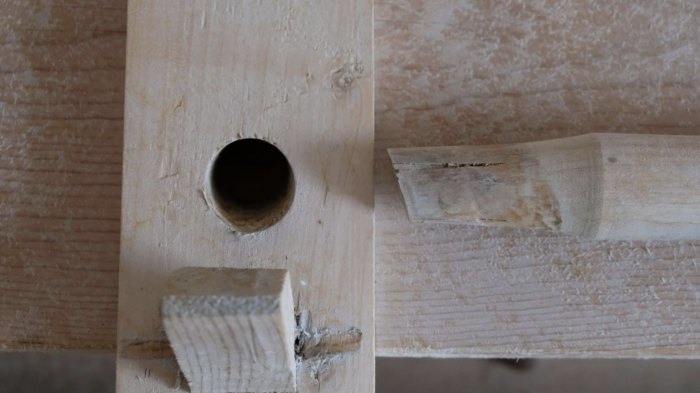 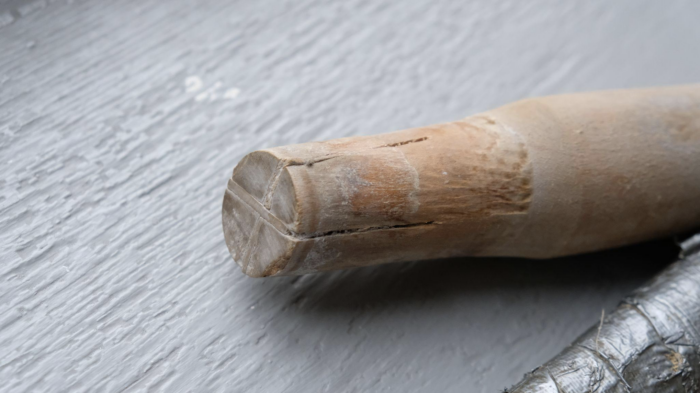 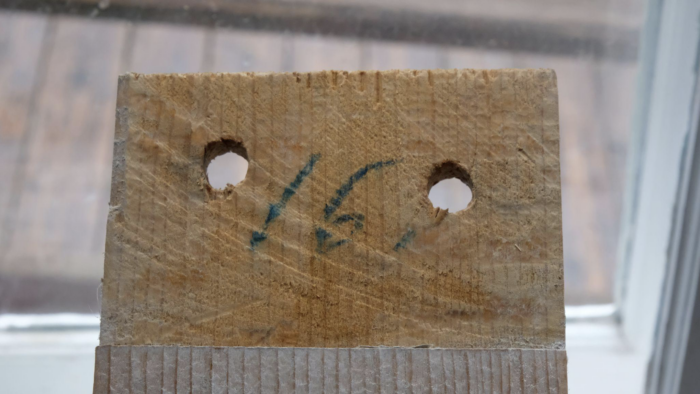 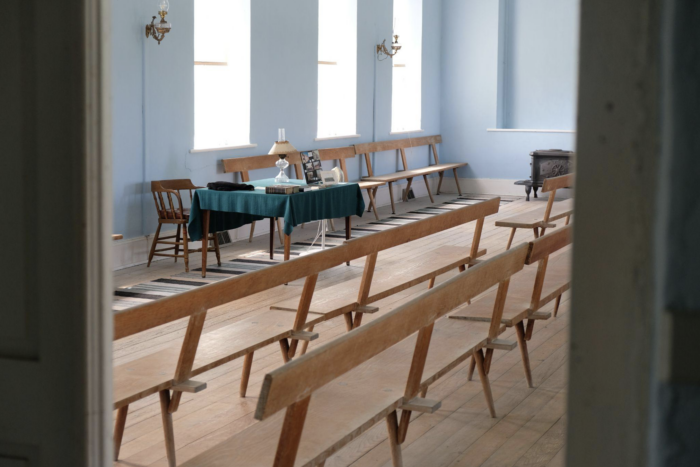 It’s easy to view these objects simply  as pieces of furniture. But I was constantly aware of their sacred purpose and the thousands of souls who have used them during the important life events a person can experience, and that brought a great sense of respect and humility to my time studying the benches.

How to opt out of Android Beta program 13, plus Android beta opt in

Gentle on my mind – FineWoodworking